Have you read The Man Who Mistook His Wife for a Hat? I’ll dig it out and put some thoughts up soon.

“Search your memory for a few such mistakes… How do you explain these occurrences?”

Do adult L2 learners tend to store things more by sound? Any number of (possibly apocryphal) examples in Japanese to (possibly) back this up, possibly: the new teacher instructing his class not to ‘sit down’ (suwatte) but to ‘touch me’ (sawatte), and then repeating the instruction more forcefully when all he gets are unnerved stares from the students; complimenting a colleague, as she bends down to change into outdoor footwear, on the attractiveness not of her shoes (kutsu) but of her arsehole (ketsu); and just last week at the welcome party for new staff I was bemoaning the inevitable march of time by saying how all the new intake of teachers looked young (wakai-so), but ended up saying they looked bad (warui-so) before hastily issuing a correction. I may have had a couple of drinks inside me at the time (I was serious about the alcohol).

I should also stress that only the last of these examples is from personal experience.

The experiments with the ‘provocatively dressed female.’ Those male testees (two Es) – we’re assuming they were all straight or bi, yeah? Not to get all Right-On about it, but in a unit focusing in large part on labelling and categorization, that seems a bit out of whack, no?.

So the first word I thought of to pair with Black was Blue. Which you may choose to interpret as saying something troubling about my propensity for violence, or you may choose to forgive as I was wearing a blue shirt at the time and the sleeve was right in my field of vision as I was doing the activity. After leaving you with the flaming turd of Sapir-Whorf last time, I’m now standing on your lawn threatening to cover your house with toilet-paper embossed with the letters NLP.

I’ll also give you a couple of pictures from one of this year’s SHS textbooks. The specific lesson is problematic for any number of reasons, but seems relevant. 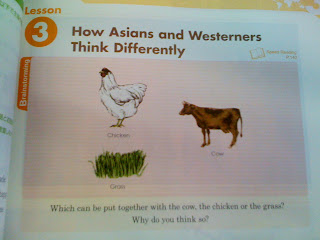 It’s apparently sourced from here which I might track down if only because I suspect I’ll hate it and there’s nothing like picking holes in stuff while fuelled by a touch of righteous ire.

Markedness – Might it be that it’s not the larger item that is usually unmarked, but that it’s the more prestigious one? Generally bigger = better, but not always?

2.    False Dichotomies
I’ve really got nothing much on the Carter reading, apart from more nits to pick about antonymy and the way people apparently conceive of pairs of opposites that are in reality anything but.

3.    For you, Tommy…
“Confront your interlocutor…” This seems an unusually aggressive way to go about things, but hey-ho. I tried this with my (Japanese L1) wife, and this is how she reacted –

“What do you mean, ‘ways’? I already am talking, you don’t need to make me. Stop shining that light in my eyes. Why are you speaking with a German accent?”

Annoyingly, for the purposes of this exercise at least, she really doesn’t code-switch at all. I got nothing from her. Nothing. I’ll try waterboarding her next time.

Our eldest son is a little over two years old. We’re not going overboard with the ‘English Only’ home environment, but we’ve both been making much more of an effort to keep our language usage consistent and avoid code-switching. She seems better at it than me, but then she just has a much better ear for languages generally.

4.    Yeah, thanks for that Jean
I’ve got the kindle edition of Words in the Mind and the page numbers don’t seem to match up. Chapter 18 is about Labeling [sic] and Packaging, right? On the assumption that it is, let’s continue.

As mentioned above, our eldest is a little over two, so a lot of this hit fairly close to home. It’s inevitable that’ll colour my responses slightly. Factor that in as you will. He’s currently got an active vocabulary of about two-dozen words, so reading about the ‘vocabulary explosion’ kids experience between the ages of one and two did me no good whatsoever in the fretting parent stakes. He’s a boy and we’re trying to raise him bilingual, so we’re prepared for slow progress, but still…

Interestingly, a fair few of his words seem to form natural pairs: up and down, on and off, more (want) and no (do not want). That last pair is especially popular, you will be unsurprised to learn.

““It is natural that fond mothers, waiting for the traditional word joyfully interpret it as a reference to themselves; but dispassionate scholars should not follow them into this trap.””
(quoting Leopold, 1948. p211)

“Brian would not believe that a horse was an animal.” (p218)

Given that the experimenter was brandishing a bit of coloured plastic and insisting it was “an animal,” I can well understand young Brian’s scepticism. In fact I’d say it speaks rather well of him.

Before this all gets a little unseemly, I’ll cut to the chase with two broad observations on these chapters.

1.    Seemingly very narrow base of observations and assumptions (patrician, patronizing, middle-class, Anglophone), which I’m not sure represent such a solid foundation from which to generalize. E.G.s – English is stress-timed, but many other languages aren’t, so using stress as a basis for word separation may be far from universal. The assumption that learning to read (p233) is a universal and necessary part of a child’s language development, which rather clashes with the observations on blind people from earlier in the unit (Sign Languages are conspicuous in their absences from these discussions, I note, despite the burgeoning popularity of Baby Sign courses and books), and regardless of the fact that no country has 100% adult literacy. And just a general pervading sense of there being a single correct ‘adult’ worldview which children must and will inevitably grow into. You know what? If it’s not got dinosaur bones then I wouldn’t think of it as a real museum either.

2.    Very much focused on the software while ignoring the hardware. I’d agree that, “it’s oversimple… to argue that children just can’t pronounce things properly,” (p225), but not so simple that it can be easily dismissed in a couple of pages. Speaking is hard. Just the mechanical process of coordinating mouth, tongue, throat, and lungs is incredibly complicated. It’s a lot to ask to expect mastery from someone who’s still shitting their pants. We also get a reference to “what we know about the brain,” (p246) tacked on at the end, almost in passing. As far as I understand it the brain develops essentially through pruning. Early on it’s basically an undifferentiated, almost homogeneous mass, and as it grows connections are severed and reduced to leave better defined pathways. Stop me if any of this seems pertinent…

Email ThisBlogThis!Share to TwitterShare to FacebookShare to Pinterest
Labels: lexis